Get empowered and educated. Take advantage of virtual webinars that are free and open to the public. These do NOT provide a professional certificate of attendance. REGISTER and attend by phone or online! Register with the links below or call our 24/7 Helpline 800.272.3900.

Healthy Living for Your Brain and Body

Topics: dealing with stigma, end of life care, strategies for activities of daily living, and communication.

Understanding and Responding to Dementia-Related Behaviors

Candid Conversations is a virtual, INTERACTIVE session to openly discuss the challenges and opportunities of caregiving for a person with dementia in a safe, confidential, and open environment.

Learn from experts who will cover various topics related to dementia care within the Black/African American community, including public health approaches to reducing the risk of dementia, social isolation and social distancing during COVID-19, health living, and telemedicine.

Learn the basics of Alzheimer's disease and related dementias, how to care for your loved ones while maintaining your own health and sanity, and the importance of Asian Americans and Pacific Islanders (AAPI) voice in research.

What is Classic Upward Bound?

Classic Upward Bound (CUB) is a FREE academic
and college preparatory support for high school students (grades 9 through 11) on their path to earning a college degree.
CUB empowers participants to complete high school and enter and complete a program of postsecondary education.
We accept first-generation college students or those who are low-income and qualify for free or reduced lunch. 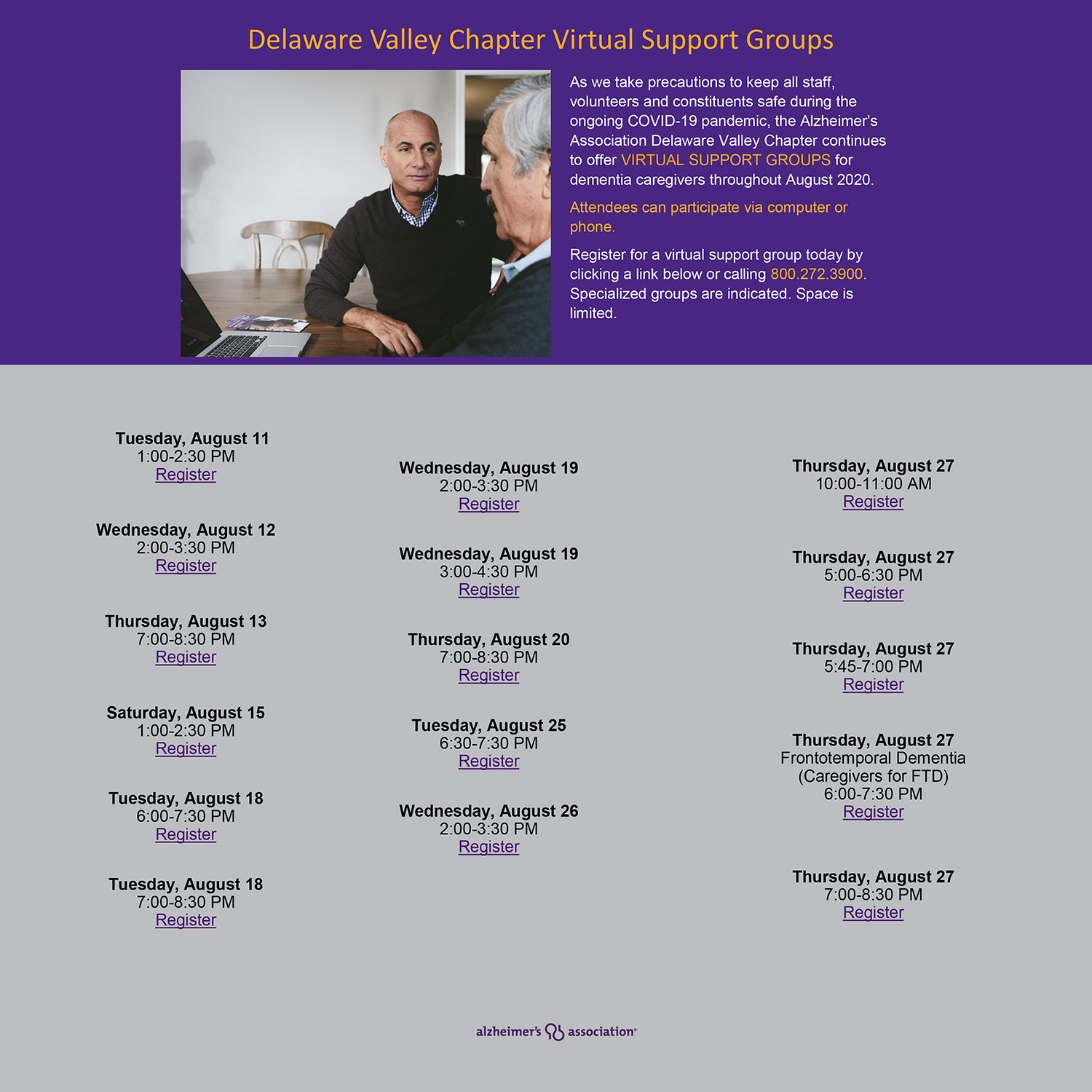 As we take precautions to keep all staff, volunteers, and constituents safe during ongoing COVID-19 pandemic,

dementia caregivers throughout August 2020. Attendees can participate via a computer or phone.

Register for a virtual support group today by clicking a link below or calling 800.272.3900.

Success, one student at a time. 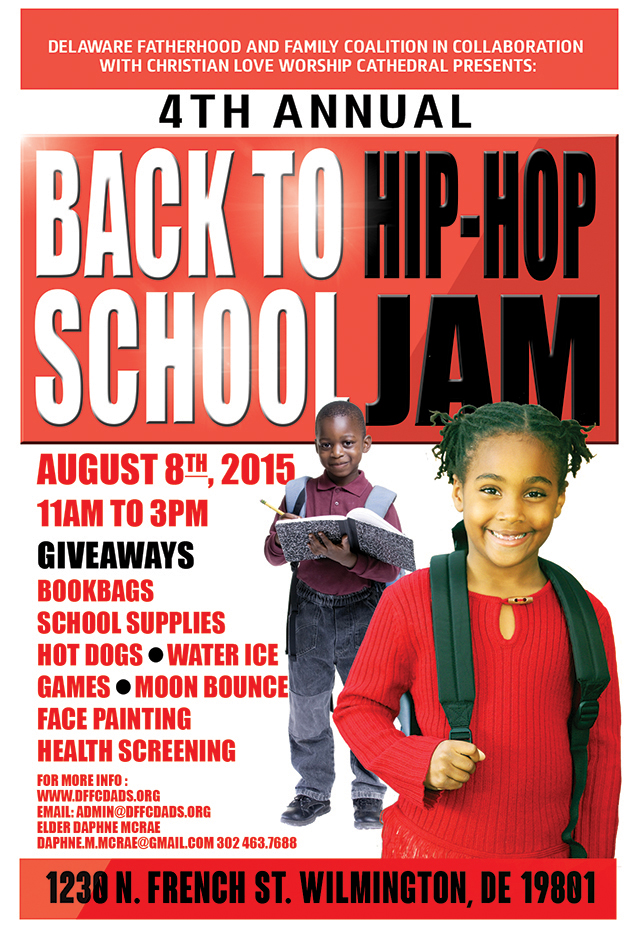 Children with involved fathers are significantly more likely to earn a college diploma. 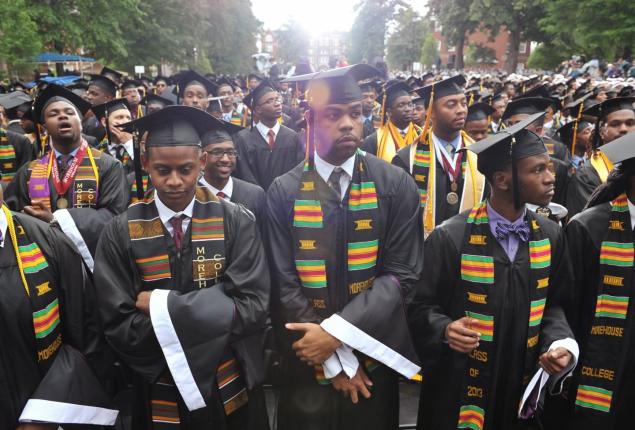 I recently read an article on American Enterprise Institute website aei.org by W. Bradford Wilcox, associate professor in the department of sociology at the University of Virginia. Teenagers with involved fathers are significantly more likely to graduate from college. Specifically, compared to their peers whose fathers are not involved, young adults with involved fathers were at least 98 percent more likely to graduate from college.

Bradford stated in his conclusion that in today’s global economy, a college diploma has emerged as an increasingly important ticket to achieving the American Dream. Among today’s millennials between ages 25 and 32, every year college graduates earn on average about $17,500 more than their peers with only a high school diploma.[11] A recent Brookings Institution study found that, over a lifetime, a college degree provides an income premium of about $570,000—what this study calls a “tremendous return” on this education investment.[12]

The good news about paternal involvement is that fathers have almost doubled the average amount of time they spend with their children each week, from 4.2 hours in 1995 to 7.3 hours in 2011.[14] The bad news is that partly because fewer adolescents are living in intact, married families, a large minority of the nation’s teens—especially ones from poor and working-class homes—are not experiencing today’s ethic of engaged fatherhood. Thus, if we wish to increase the odds that all young adults have a shot at the higher education of their choice and—by extension—the American Dream, one thing we need to do is figure out how to bridge the fatherhood divide between children from college-educated and less-educated families.

Bring Your Dad to Breakfast 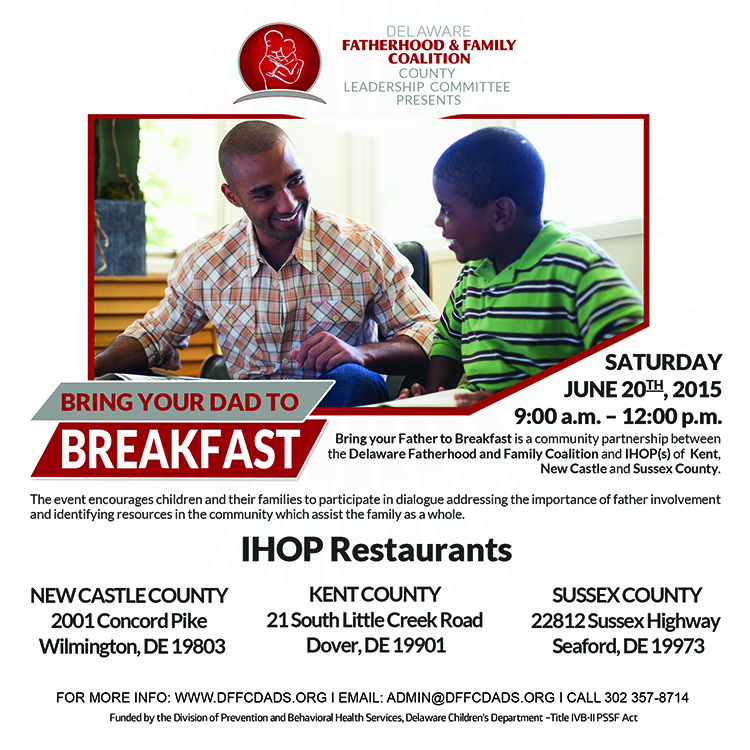 Bring your Father to Breakfast is a community partnership between the Delaware Fatherhood and Family Coalition and IHOP(s) of Kent, New Castle and Sussex County.

The event encourages children and their families to participate in dialogue addressing the importance of father involvement and identifying resources in the community which assist the family as a whole.

Something broke inside Kasai Guthrie when his father returned to the Philadelphia area. He was closer, sure – much closer to Kasai's Newark home than when he lived in Florida, where he had moved when Kasai was 4 years old.

For years, Kasai had been told his father couldn't see him often because of that distance. Five states were between Delaware and Florida.

But now there would be just one borderline, only about 35 miles door to door, and Kasai was psyched. He knew how things would go. His father would come to his basketball  at Layton Preparatory School. They would hang around together and spend hours talking about girls, basketball and other stuff fathers and sons discuss.

But it didn't happen. Kasai was not seeing his father any more than when he lived five states away. He was crushed.

The strong, confident Kasai, who aced almost all of his classes, stood as a leader among his peers, and excelled in basketball, started to disappear. A powerful depression descended upon him. He didn't want to get up in the morning. And anger broke out in ways that left his mother stunned.

"He plummeted into someone we didn't know," she said. "Cursing out teachers? What? Bringing home F's? What? What just happened?"

It's what happened next that changed Kasai's world and launched a mission that he hopes could change the world for other kids who grew up without their fathers.

He calls it "We Need Our Fathers" and it has been the focus of , like the one Jan. 17 at P.S. DuPont Middle School in Wilmington. The purpose is to promote strong  models for young males of color.

Kasai Guthrie, now a 17-year-old junior at Glasgow High School, is coming back.

Kasai's father, William Guthrie, knew nothing of this trouble. The former International Boxing Federation light heavyweight world champion (1997) stayed in touch with his son – one of 12 children (four boys, eight girls) he fathered over the years. They spent time together in the summers and had periodic visits. But he had no clue that his son wanted more.

Truth be told, William Guthrie had never known the kind of father Kasai was looking for either. He loved the two men who held the title in his life – his biological father, who was a junkie, and his stepfather, who was a hard worker and reliable, but also a junkie until he beat heroin and became an alcoholic. Both now are dead.

The Rev. Dr. Sheldon Nix: The power of a father and a mother in the black family

The story of the black family, and of black men in particular, that is often told in our society is that black men are living marginal lives at best and have abandoned their many children and don't want to be involved.

A young African American man I'll call Alex told me sobbing in a group session I was leading one day that "If my father had loved us like he loved his new children (by his second wife), I would never have become addicted." He bought the almost always false idea that his father had not wanted to love him and his siblings. That version of the story misses the real reasons some black fathers aren't involved with their children. 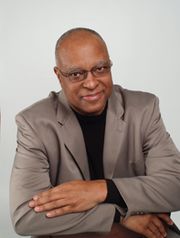 Alex began to see his father differently when another man in the group told him in tears (yes, black men cry) that in his first marriage, he was often high, often out with other women, and not connected to his first group of children. The stresses of life and marital struggles were major factors in his lack of involvement with his kids. But now, he told us, he was remarried, had become a serious Christian, was drug free, and had a good career. And he was trying to be a good husband and father to his "new" family with the support of his church. That's not a "turnaround" story we often hear.

And then there are the stories of black men like my father Theophilus, Delaware's second black attorney, who stayed with my mother for 56 years until he died and was a great dad. That's another kind of story that doesn't often get told. We have to understand the multiple "father stories" in our communities, the different patterns of involvement and parental effectiveness and the factors that influence involvement and effectiveness, if we are going to strengthen the black family.

And it's shocking how much it matters that fathers be involved in the lives of their children. In Delaware, 40.1 percent of white children are born to single mothers, but 72.1 percent of black children are born to single mothers (Source: Kids Count 2014). And the impact of that one fact is shattering. Just take poverty. A child in Delaware living with two parents is living in a household earning $82,058 a year on average. A child living with just one parent is living in a household earning just $25,201 – over three times less income (Source: Kids Count 2014).

Put another way, the poverty rate for kids drops dramatically when the child is living with two parents (biological or step-parents). Nationally, children in father-absent homes are five times more likely to be poor, and significantly more likely to end up in prison, end up using drugs, become pregnant as teens, end up dropping out of school, and yes, end up dead.

"Helping fathers of all ethnic and racial backgrounds improve their own lives and helping them be good fathers and partners is the purpose of the Delaware Fatherhood & Family Coalition" says Mary Polk, founder of, the state's largest father-focused organization (www.DFFCdads.org). With over 150 organizations and leaders as members, the coalition is spearheading a movement to promote father involvement in the lives of their children, and to enable effective co-parenting between fathers and mothers regardless of whether the two biological parents are still together as a couple.

As the Complexities of Color Agenda makes clear, there are other "pillars" upon which we must rebuild our struggling community. But the enormous impact of father absence on the lives of our children makes a compelling case that, in addition to the vital task of supporting single mothers, we must also strengthen father involvement.

The Rev. Dr. Sheldon Nix is coordinator of the Delaware Fatherhood & Family Coalition.