93,000 dads on a private Facebook group find the
support they’ve been seeking. 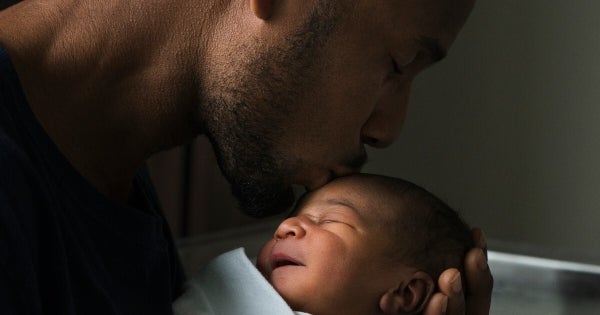 In 2008, Matt Prestbury was tired of the uninvolved Black dad narrative. Similar to how the FUBU changed the hip-hop fashion landscape in the mid-90s by designing and selling clothes from within the community, Prestbury created a space for Black dads with content created by Black dads.

“When I got on Facebook, I figured that was the best opportunity for us to present positive images of black dads to the world so everybody can see who we truly are,” says Prestbury. “We would be able to represent ourselves. I felt like we had an opportunity there where we could show out using our own words and our own images, and all of that good stuff. We don’t need people to tell other people who we are.”

With over 93,000 members, the Black Fathers group has grown into one of the largest groups of dads on Facebook. It’s a place where dads come to find community, brag about their kids, get support from each other, and get parenting advice. We caught up with Prestbury to talk about mental health, how this support group has opened up after going private, and how what’s happening online in the Black Fathers group is having a positive impact offline.

What prompted you to start the Black Fathers Facebook group?

When I first started the group, I was still a relatively young father, and I had had two children with my first wife. When we separated, the children came with me, and she kind of went out of the picture. So I began to do things with other fathers because I really wanted to create a community. I invited other dads out to different events and started fatherhood groups at the public schools where I work.

More specifically, as far as black fathers are concerned, we had the reputation of being uninvolved in our kids’ lives, and I felt that people looked at those of us who were involved like we were unicorns. But you know that you’re not, you’re not an anomaly, you’re not the exception to the rule. You really are the rule. There were tons of us. We just didn’t have a space where that was being shown.

Why did you transition from an open Facebook group that showcased Black fathers to a closed group where Black fathers interact exclusively with each other?

It was about five years ago. We had gotten a lot of publicity early, and tons of people wanted to join. And at that point, we would let everyone in to see what was going on because I wanted to showcase what traditional parenting media wasn’t showing. And I wanted to show the world.

But at some juncture, it became problematic because I couldn’t just keep telling people who weren’t Black fathers that they could observe but not say anything, right? And there were many times when that philosophy would be questioned, and we would get stuck in back-and-forth arguments. So, it just became a thing where it was just more problematic than it was worth. So went the route of making it a private group.

How have the discussions happening in Black Fathers changed since then it became a Black dads group exclusively?

Well, since becoming a closed group just for Black fathers, we’ve seen tons and tons more transparency, vulnerability, and discussions about things that people weren’t opening up about before. Guys are way more comfortable because they feel like everybody in there in some sort of way can relate. We might not all go through the exact same thing, but I can still relate man-to-man and have compassion and empathy.

How do you keep the environment of the group positive?

For the most part, there’s an understanding that we’re here to uplift each other. Like, the world beats us up enough. You go outside, and you get it out there. Sometimes you come in, and you get it from your spouse. So, you don’t need to come in here and get beat up. We really pushed that and created a whole culture where people truly buy in.

Today, we had a situation where some guy was just totally out of hand, and I said something to him. And you know, he just said, “Yeah, that’s my bad. I didn’t mean for it to go like that when I said it.” Even though he was really being a prick, just the fact that he owned his stuff and apologized and worked to make amends was significant.

What do you think the value of the space has been every time the killing of an unarmed black man breaks into the broader public discussion?

We aren’t like a complete monolith. But being all black men, we really understand what it is. It’s sad, and it sounds sickening when I say it, but it’s our daily reality. We understand it. So, for the most part, it’s a place for us to come together and confirm or reconfirm what we already know. But it’s also interesting to get different perspectives as well. There are times where some people see the future as hopeless, and other people hold onto hope. People just look at things differently.

What are some of the other specific challenges the group has been effective at addressing?

The family court system can be a challenge for many guys in the group. Navigating custody, visitation, and child support are struggles a lot of guys have. And mental health is a huge one that I focus on. There are so many stressors. Just navigating this society as a Black man, dealing with unemployment and all the anxiety around COVID. We have our kids who are not in school for these long periods. And then when they go to school, we’re worried they’re going to get COVID. So all those stressors play a huge part in our mental well-being.

Mental health is especially a challenge for Black men. We don’t talk about our struggles. We don’t do therapy. It’s scary because suicide attempts by black men are on the rise. There are so many people in the group who are dealing with depression, some even to the point of suicidal ideations. Changing that trend is very important to us as black men and our children.

Have you seen more acceptance therapy and other mental health interventions because of the conversations in the group?

Oh, absolutely. You can see things are changing in terms of what we promote to one another. So when you see someone share their struggles, you have people in their group who put their phone numbers up so they can talk. And guys are always encouraging therapy. So it’s been a change. We’re getting to the point where people can be fully open. So if anybody asks if someone is struggling with a specific issue, people will willingly open up and say, “Yeah, I deal with that, too. And this is what helps me.”

So it’s been extremely helpful. I deal with depression and anxiety, and I have absolutely no problem saying that to anybody in the group and letting them know because I know that I can feel comfortable doing it. I’m not going to get backlash or negative judgment or anything like that when I open up.

Now that you’ve developed a healthy culture in the group, do you have plans to leverage that energy?

We have the Black Fathers & Co. group, which I started after I made Black Fathers private. I still wanted that opportunity for women to be connected to what we were doing and I still wanted to show the world examples of involved Black dads. So that’s a public group that anybody can join, with the idea that it’s still a celebration of the Black fathers.

We also started the Black Fathers Foundation to help resource dads. We’re going to be starting a scholarship in Baltimore City for a young man who’s already a father but still in high school, with the aim of supporting someone who is going to attend an HBCU.

What inspired you to structure the scholarship that way?

I wanted to have a keen focus on younger fathers. We want to take a holistic approach and not just drop money into somebody’s student account or whatever. I’ve seen a lot of very young and first-time fathers joining the group because they know that this is a place where they can come to get advice.