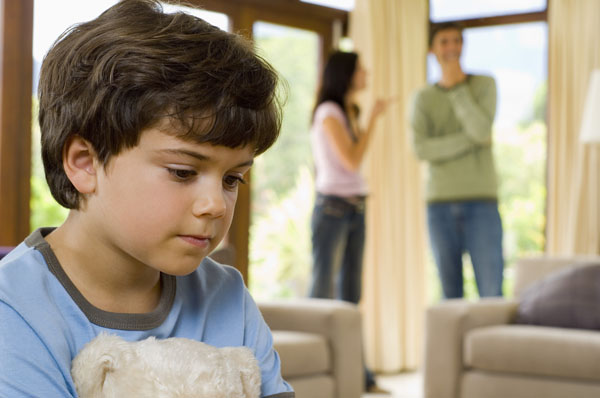 Once upon a time, there was a happy family—dad, mom, and their little boy. One year, Dad and Mom gave their little boy a puppy for his fourth birthday. That little boy and his puppy became best friends, as little boys and puppies do. The puppy was involved in his whole life as a playmate and confidant. Every night the puppy slept at the foot of the little boy’s bed and helped him eat the crust of every sandwich he enjoyed. Later, the little dog waited at the door every afternoon to meet him when he got home from school. They did homework together, talked about friends at school, and cried over losses together.

Then one day, Mom and Dad decided they needed to divorce, and the family changed forever. During this frantic, frustrating time, Dad was having a particularly upsetting day, angry about Mom, the divorce, money, and other grown up things, when he walked into the living room and saw that dog with those important papers in his mouth! And not only had he torn them up, he had also left a “gift” right in the middle of the room … again.

Dad lost it, yelled at the pup, kicked it across the room, then grabbed it by the scruff of the neck. Then he turned toward the little boy, who was witnessing all of this, and said, “This dog is going away! Don’t you ever play with him again! He is a bad, bad dog! I’m calling the dog pound to pick him up right now!” Then he threw the dog out the door.

Can you imagine how that little boy felt as he saw his best friend kicked and then thrown away? Our children are quite literally made up of us—fathers and mothers. Deep inside every one of the trillions of cells that makes up your child is pieces of his mom and dad, in DNA, curled up together. Your child is honestly a “chip off the old block” of his two parents. You know that, but too often you probably forget.

And whether it was intentional or not, maybe you have tried to turn your child against his mother—either directly by telling him mean things about her, or indirectly by just hinting negatively about her. Maybe you have said things like, “Oh, that’s just your mom, you know how she is.” Or, “Well, I’m not surprised she did that ….” And make no mistake, these kinds of comments move you dangerously close to placing yourself between your dear, sweet child and someone he loves more than anyone else, except you.

The danger is that, when you talk trash about your child’s other parent, three things happen:

First, you break your child’s heart. Children love their mamas and daddies, even when they don’t act right or when they hurt each other. And you cannot change that.

Second, you’re damaging your relationship with your child. Even if what you are saying is gospel truth, in your child’s mind you’re like a schoolyard bully or anyone else who says something bad about his mother. His natural reaction is to defend her, prove you wrong, or just separate from you emotionally (if not physically). It’s like you’re intentionally closing down your child’s heart toward you, because you’re attacking his mama.

And third, you’re likely not bothering your ex at all. Usually a divorced dad talks bad about his ex-wife to feel like he’s getting back at her somehow, but in most cases, she quit caring about what he says a long time ago. What a waste—especially if you’re damaging your relationship with your child in the process. It’s like shooting yourself in the foot.

In over two decades of working with broken families, I have never seen one parent’s attempt to turn a child against their other parent to be successful. Never. Sometimes it just breaks the child’s heart. But often it will create deep, festering scars in the relationship with the manipulative parent that may never heal.

Permit me to say that bad-mouthing your child’s mother—especially when your child can hear—is wrong, damaging, and just plain foolish.