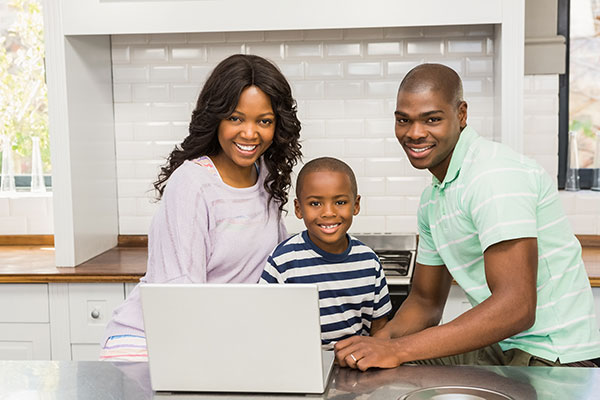 The pandemic wreaked havoc on many families’ summer plans, and now as school starts back in session, it appears the turbulence will continue. Some schools plan to take place in-person, some plan to go virtual, some are planning for a blended version. Regardless of how it starts off, most schools have been clear that all plans are subject to change depending on COVID-19 numbers—which gives way to more uncertainty.

Uncertainty means different things for different people, as we are each faced with unique family dynamics and circumstances. However, we are all in the same boat when it comes to the concern for how these changes will impact our children’s academic success, mental health, physical well-being, and futures.

Whether your children are at home from the start or may be learning from home at some point, here are some tips to keep in mind to help them achieve success academically, stay physically and mentally healthy, and forge ahead with resiliency.

Realistic Expectations: This is a key starting point. Set your standards high but be sure to give yourself and your children grace along the way. Don’t strive for perfection, be too intense, or overschedule. Simply do your best as you step into this type of teaching role while encouraging your child to do the same.

Requirements: Be clear on what is required of your child weekly and daily. Monitor their ability to comprehend the task at hand and complete the assignment. Depending on your individual child, your necessary level of involvement will vary—which means potentially more work and more stress for some families than others.

Rules and Routine: Create rules surrounding time for work and play. Many families find that it works best to get the schoolwork completed first, then have the rest of the day for play. If your child’s school requires them to be on live sessions, that will determine their schedule to some degree. However, it is up to you and your child to come up with a routine that fits best—then stick to it.

Resources: Check first with your child’s school to see what they have to offer, then go online as there are endless free resources to help with homeschooling.

Many of us got our first taste of homeschooling back in the spring when schools were shutting down across the nation. Depending on how that went for you and your child(ren), you may be feeling more or less stressed about beginning the new school year at home. You are encouraged to take it one day, one subject, one lesson at a time, and remember that we are all in this together and that this too shall pass.

They're essential for a long lasting union.

In all aspects of life, communication is key. But in a marriage, if there’s a communication breakdown, it can bring the whole thing down. As such, it’s vital for couples to communicate effectively. Unfortunately, however, that’s usually a lot easier said than done.

“The number one thing is that people want to be understood and they want to feel like their emotions are being valued,” says Jonathan Robinson, a couple’s therapist and author of the new book More Love, Less Conflict: A Communication Playbook for Couples. “And when that doesn’t happen, marriages start to have problems. I never have couples come into my office saying, ‘We really understand each other, that’s why we want a divorce!’ But of course the opposite happens all the time.” But how can couples start on that road to understanding and better, healthier interaction? Here are eight traits that all happy marriages share.

They Do Daily Appreciations

A simple note, text message, or compliment can go a long way in a relationship, Robinson says. Just letting your spouse know that he or she is appreciated and that their efforts aren’t going unnoticed can help them to feel validated and understood. “The number one correlation with happiness in couples is the number of appreciations they give to each other,” he says. “We forget to do daily appreciations.”

As your grade school teacher likely chided you about, there’s a difference between “hearing” and listening.” This is a big part of a happy marriage, too. In order to fully take in what your spouse is saying to you, Robinson recommends what he calls ‘empathic listening,’ which means listening and responding not with solutions or options but with such phrases as, “I can see that you’re upset because…” That level of understanding can help husbands and wives diffuse arguments relatively quickly. “It’s hard for couples to do this because they get triggered so easily, and they don’t know this skill,” says Robinson. “So it’s really important that they practice it with small things before they get triggered. So that, when they’re triggered, they’ll still be able to do it.”

They Write Down Criticisms

No matter how things are going in your marriage, good or bad, if you criticize your spouse aloud, there will be flare-ups. That’s why Robinson recommends writing down some things about your partner that might rub you the wrong way and presenting them to your partner. When criticisms are presented in this fashion, your partner can take them, process them, and formulate an answer, rather than just firing back a retort.
“I usually have couples do that once every three months so it doesn’t get overwhelming. Just say, ‘These are some of the things I’m having a hard time with,’” Robinson says. “Complaining and shaming your spouse into trying to change does not work. I think direct criticism is to be avoided completely. But if you need to say something, do it in written form.”

Research shows that happy couples who practice a 5:1 ratio of positive to negative behaviors are more likely to be happy and healthy. Robinson does agree that that sentiment has shown to be true, but also acknowledges that very few married couples realistically practice that. However, he says that saying positive statements out loud on a regular basis helps build equity in a relationship and can be key in diffusing arguments down the road.

“It’s really important to have those positive statements,” he says. “It’s like money in the bank. So that, when you need to make a withdrawal because of life circumstances or stress, you have something in the bank to withdraw from. And if you don’t say positive statements on an ongoing basis, then your marriage can easily go bankrupt.”

They Embrace the Power of the Time Out

A marital disagreement can go from a spark to a five-alarm blaze with one wrong word. To keep that from happening, Robinson recommends putting the brakes on a disagreement before it gets out of hand.

“If you see you’re getting hot and heavy and upset, use the phrase ‘red light,’” he says. “That’s a signal that you should take minutes to just quiet down and say nothing and calm down. By the time you’re back after two minutes, you’re more likely to be in the rational part of your brain and not be upset.”

Don’t underestimate the power of simple gestures. You can say a lot without saying a word just by holding hands or giving a hug. “All these things are really important, because in this culture, we don’t have enough physical touch,” says Robinson. “So I have couples do that every day. And it’s not to be overlooked.”

They Use “I” Statements

What you say during an argument matters. When you do argue with your spouse, try and shift the focus by not casting blame and saying, “You did this” or ‘You need to fix this’ and instead use “I” statements. “When you use ‘you’ statements, they feel blamed and their ears turn off,” says Robinson. “So, when you use ‘I’ statements, you avoid that. You can take responsibility by using a statement like, ‘One way I see I contributed to this upset is…’ What you’re trying to do is not have your partner become defensive and ‘I’ statement or taking some responsibility helps with that.”