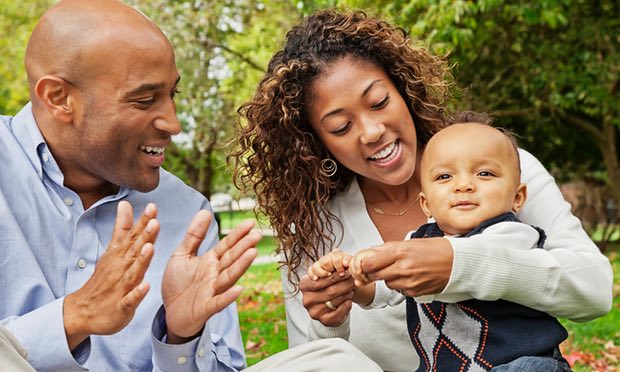 Children of confident fathers who embrace parenthood are less likely to show behavioral problems before their teenage years, researchers have found.
A new study suggests that a man’s attitudes towards fatherhood soon after his child’s birth, as well as his feelings of security as a father and partner, are more important than his involvement in childcare and household chores when it came to influencing a child’s later behavior.
“It is the emotional connection and the emotional response to actually being a parent that matters enormously in relation to later outcomes for children,” said Maggie Redshaw, a developmental and health psychologist at the University of Oxford and co-author of the research.

Writing in the journal BMJ Open, Redshaw and colleagues at the University of Oxford describe how they explored the influence of fathers on the behavior of their offspring by analyzing data from the Avon longitudinal study of parents and children – a large-scale UK study that followed the health and development of thousands of children born in the early 1990s.

The study asked parents to complete questionnaires at various points in their child’s life. Among the surveys, mothers were asked to assess their child’s behavior at nine and 11 years, with questions probing a variety of issues including the child’s attitudes towards other children, their tendency to restlessness, whether they were willing to share toys and their confidence in unfamiliar situations.

Fathers, meanwhile, were asked to complete questionnaires on their approach and feelings towards parenting both eight weeks and eight months after their child’s birth, with questions including how often they helped with housework, how confident they felt as a parent, and whether they enjoyed spending time with the baby. Answers were given on scales, and then totted up.
Looking at the results for more than 6,300 children who lived with both parents at least until eight months old, the researchers found that children whose fathers were more confident about being a parent, and who were more emotionally positive about the role, were less likely to show behavioral difficulties by the ages of nine and 11. By contrast, the degree to which a father engaged with chores around the home or activities with their child apparently had no such influence.

Examining the fathers’ scores for emotional responses to their babies, taking into account factors such as the child’s gender, family size and socioeconomic status, it was found that for every point the scores increased above the average, the relative chance of the child having signs of behavioral problems decreased by 14%, and 11% at ages nine and 11 respectively. Similarly, for every point increase beyond the average in the fathers’ sense of security in parenting, the relative likelihoods of the child having behavioral problems were 13%, and 11% lower by ages nine and 11, respectively.
While the authors admit that study relied on self-reporting, and that attitudes to parenting might have changed over the years, Redshaw says the work highlights the impact of how parents feel about their roles on child development. “It is part of the approach that early experience matters and it matters from the point of view of both parents,” she said.